In 2018 we celebrated the Tercentenary of the birth of Nano Nagle in Ballygriffin in 1718.  The Presentation Sisters have had an association with Dandenong since 1912.  And even at the very beginning of St John’s Regional College, the Sisters played their role and, of course, in time (from at least 1959) the Sisters were teachers, counsellors and administrators in the ever-expanding St John’s throughout the 1970s, 80s and 90s.

The following article is an edited version of and adaptation from Heart Aflame by Miceal Ledwith and Desmond M Kyne.  It’s good in this Tercentenary year to reflect anew on the wonder and spirit-filled woman we know as Nano Nagle. 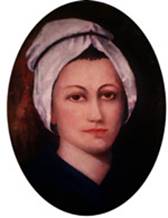 “If I could be of service in serving souls in any part of the world,
I would gladly do all in my power.”

Honora (Nano) Nagle, who in 2003 was named the “greatest Irish person of all time”, was born in 1718 at Ballygriffin in Cork, Ireland.  The Act of 1695 made it unlawful to open a Catholic School in Ireland or to travel overseas for a Catholic education. The Nagles had connections in France and they managed to send their daughters Nano and Ann to Paris where they lived for 16 years. They received a Catholic education and lived the life of well-to-do young women in French society.

After their father’s death, Nano and Ann returned to Dublin to live with their mother. Here Nano came face to face with desperate poverty on the streets of Dublin as well as with the generosity and kindness of her sister Ann to those who were living in poverty. After the death of her mother and her sister Ann, Nano returned to live with her brother at Ballygriffin. However, confronted with the misery, poverty and hopelessness of the Irish people, she went to France and entered a Benedictine convent at Ypres to pray for them. After a short time, with the help of a spiritual director, Nano realised that her vocation was to return to Ireland to address the injustice of the Penal Laws by educating poor Irish children and caring for those who were the most poor and oppressed.

In 1754 at the age of 36 she began her first school for 30 poor children, in defiance of the Penal Laws and in complete secrecy.   Within a year she had 200 students. Within 15 years, she had 7 schools in Cork. Schools were for Nano a primary way of addressing the root causes of poverty and the systemic injustice of the Penal Laws. Education gave children a sense of their own dignity as well as practical skills and knowledge to earn a living, rise out of poverty and make their way in society. She also ensured that they had a sound religious education. As Nano herself said, schools were not her only object. Her other “lantern works” included visiting those who were sick, elderly, imprisoned and destitute – often at night, walking through the dark and dangerous streets of Cork by the light of a flickering lantern. In 1783 she built a home for aged and destitute women.

In January 1775, at the age of 56, Nano invited two young women who assisted her in the schools to join her as the first members of her own religious order. Another young woman joined them later. Nano’s dream was to have a group of women who would be dedicated to the education of those who were poor and destitute and to other “lantern works” that would challenge the unjust social and political structures that made and kept people poor. On Christmas Eve 1775, Nano’s own congregation of sisters was established – the Sisters of Charitable Instruction of the Sacred Heart of Jesus. When in 1805 the Order was approved by Rome, the name of the congregation was changed to “The Presentation Sisters of the Blessed Virgin Mary”.

Nano became well known as “The Lady with the Lantern”. Her sisters were called “Nano’s Walking Nuns” because, like Nano, they walked the streets of Cork bringing assistance and comfort to those who were most in need. Nano Nagle died 26 April, 1784. Her last words to the small group of sisters at her bedside were “Love one another as you have hitherto done. Spend yourselves for the poor.”

Your heart yearned to embrace the world,

But your ways were held within narrow streets.

Each day’s pilgrimage was walled.  You fared

No.  you kindled fire on homely hearths,

Small sparks of hope against the dark.

But within…ah, within… there blazed such fired,

Such beacon of desire to see the dream of God

Made real on earth, that still it flames

To kindle other hearts afar in space and time.

And we, whose steps are held in walled

And narrow ways, ask only this:

May we burn with like desire while here we seek

To bring the dream of God alive today

In this small corner of our yearning world.